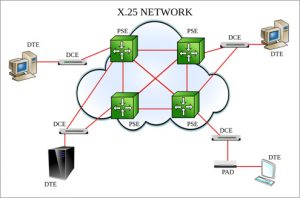 X.25 is an ITU-T standard protocol suite for packet switched wide area network (WAN) communication. An X.25 WAN consists of packet-switching exchange (PSE) nodes as the networking hardware, and leased lines, plain old telephone service connections, or ISDN connections as physical links. X.25 is a family of protocols that was popular during the 1980s with telecommunications companies and in financial transaction systems such as automated teller machines. X.25 was originally defined by the International Telegraph and Telephone Consultative Committee (CCITT, now ITU-T) in a series of drafts and finalized in a publication known as The Orange Book in 1976.

A public data network is a network established and operated by a telecommunications administration, or a recognized private operating agency, for the specific purpose of providing data transmission services for the public. In communications, a PDN is a circuit- or packet-switched network that is available to the public and that can transmit data in digital form. A PDN provider is a company that provides access to a PDN and that provides any of X.25, frame relay, or cell relay (ATM) services. Access to a PDN generally includes a guaranteed bandwidth, known as the committed information rate (CIR). Costs for the access depend on the guaranteed rate. PDN providers differ in how they charge for temporary increases in required bandwidth (known as surges). Some use the amount of overrun; others use the surge duration.

While X.25 has, to a large extent, been replaced by less complex protocols, especially the Internet protocol (IP), the service is still used (e.g. as of 2012 in credit card payment industry) and available in niche and legacy applications.

Based on ARPA’s research, packet switching network standards were developed by the International Telecommunication Union (ITU) in the form of X.25 and related standards. While using packet switching, X.25 is built on theconcept of virtual circuits emulating traditional telephone connections. In 1974, X.25 formed the basis for the SERCnet network between British academic and research sites, which later became JANET. The initial ITU Standard on X.25 was approved in March 1976.

The British Post Office, Western Union International and Tymnet collaborated to create the first internationalpacket switched network, referred to as the International Packet Switched Service(IPSS), in 1978. This networkgrew from Europe and the US to cover Canada, Hong Kong and Australiaby 1981. By the 1990s it provided a worldwide networking infrastructure. Unlike ARPANET, X.25 was commonly available for business use.Telenet offered its Telemail electronic mail service, which was also targeted to enterprise use rather than the general email system of the ARPANET. Thefirst public dial-in networks used asynchronous TTY terminal protocols to reach a concentrator operated in the public network. Some networks, such as CompuServe, used X.25 to multiplex the terminal sessions into their packet-switched backbones, while others, such as Tymnet, used proprietary protocols.

In 1979, CompuServe became the first service to offer electronic mail capabilities and technical support to personal computer users. The company broke new ground again in 1980 as the first to offer real-time chat with its CBS imulator. Other major dial-in networks were America Online (AOL) and Prodigy that also provided communications, content, and entertainment features. Many bulletin board system (BBS) networks also provided on-line access, such as FidoNet which was popular amongst hobbyist computer users

X.25 is one of the oldest packet-switched services available. It was developed before the OSI Reference Model.[4] The protocol suite is designed as three conceptual layers, which correspond closely to the lower three layers of the seven-layer OSI model.[5] It also supports functionality not found in the OSI network layer.

X.25 was developed in the ITU-T (formerly CCITT) Study Group VII based upon a number of emerging data network projects. Various updates and additions were worked into the standard, eventually recorded in the ITU series of technical books describing the telecommunication systems. These books were published every fourth year with different-colored covers. The X.25 specification is only part of the larger set of X-Series specifications on public data networks.

The public data network was the common name given to the international collection of X.25 providers. Their combined network had large global coverage during the 1980s and into the 1990s.

Publicly accessible X.25 networks (Compuserve, Tymnet, Euronet, PSS, Datapac, Datanet 1 and Telenet) were set up in most countries during the 1970s and 1980s, to lower the cost of accessing various online services.

Beginning in the early 1990s, in North America, use of X.25 networks (predominated by Telenet and Tymnet) started to be replaced by Frame Relay, service offered by national telephone companies. Most systems that required X.25 now use TCP/IP, however it is possible to transport X.25 over TCP/IP when necessary.

X.25 networks are still in use throughout the world. A variant called AX.25 is also used widely by amateur packet radio. Racal Paknet, now known as Widanet, is still in operation in many regions of the world, running on an X.25 protocol base. In some countries, like the Netherlands or Germany, it is possible to use a stripped version of X.25 via the D-channel of an ISDN-2 (or ISDN BRI) connection for low volume applications such as point-of-sale terminals; but, the future of this service in the Netherlands is uncertain.

Additionally X.25 is still under heavy use in the aeronautical business (especially in the Asian region) even though a transition to modern protocols like X.400 is without option as X.25 hardware becomes increasingly rare and costly.[clarification needed] As recently as March 2006, the United States National Airspace Data Interchange Network has used X.25 to interconnect remote airfields with Air Route Traffic Control Centers.

France was one of the last remaining countries where commercial end-user service based on X.25 operated. Known as Minitel it was based on Videotex, itself running on X.25. In 2002, Minitel had about 9 million users, and in 2011, it still accounted for about 2 million users in France when France Télécom announced it would completely shut down the service by 30 June 2012. As planned, service was terminated 30 June 2012. There were 800 000 terminals still in operation at the time.