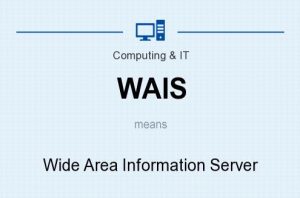 WAIS (Wide Area Information Servers) is an Internet system in which specialized subject databases are created at multiple server locations, kept track of by a directory of servers at one location, and made accessible for searching by users with WAIS client programs. The user of WAIS is provided with or obtains a list of distributed database s. The user enters a search argument for a selected database and the client then accesses all the servers on which the database is distributed. The results provide a description of each text that meets the search requirements. The user can then retrieve the full text.

WAIS (pronounced “ways”) uses its own Internet protocol , an extension of the Z39.50 standard (Information Retrieval Service Definition and Protocol Specification for Library Applications) of the National Information Standards Organization. Web users can use WAIS by either downloading a WAIS client and a “gateway” to the Web browser or by using Telnet to connect to a public WAIS client.

Inspired by the WAIS project on full text databases and emerging SGML projects Z39.50 version 2 or Z39.50:1992 was released. Unlike its 1988 predecessor it was a compatible superset of the ISO 10162/10163 work that had been done internationally.

With the advent of Z39.50:1992, the termination of support for the free WAIS from Thinking Machines and the establishment of WAIS Inc as a commercial venture, the U.S. National Science Foundation funded the Clearinghouse for Networked Information Discovery and Retrieval (CNIDR) to create a clearinghouse of information related to Internet search and discovery systems and to promote open source and standards. CNIDR created a new freely available open-source WAIS. This created first the freeWAIS package based on the wais-8-b5 codebase implemented by Thinking Machines Corp and then a wholly new software suite Isite based upon Z39.50:1992 with Isearch as its full text search engine.

Ulrich Pfeifer and Norbert Gövert of the computer science department of the University of Dortmund took the CNIDR freeWAIS code and extended it to become freeWAIS-sf: sf means structured fields and indicated its main improvement. Ulrich Pfeifer rewrote freeWAIS-sf in Perl where it became WAIT.

Thinking Machines Corp provided a service called the Directory of Servers. It was a WAIS server like any other information source but contained information about the other WAIS servers on the Internet. When one would create a WAIS server with the TMC WAIS code it would create a special kind of record containing metadata and some common words to describe the content of the index. It would be uploaded to the central server and indexed along with the records from other public servers. One could search the directory to find servers that might have content relevant to a specific field of interest. This model of searching for (WAIS) servers to search became the role model for GILS and Peter Deutsch’s WHOIS++ distributed white pages directory.

Two of the developers of WAIS, Brewster Kahle and Harry Morris, left Thinking Machines to found WAIS Inc in Menlo Park, California with Bruce Gilliat. WAIS Inc. was originally developed as a joint project between Apple Computer, Peat Markwick, Dow Jones, and Thinking Machines. In 1992, the presidential campaign of Ross Perot used WAIS as a campaign wide information system, connecting the field offices to the national office. Later, Perot Systems adopted WAIS to better access the information in its corporate databases. Other early clients were the Environmental Protection Agency, Library of Congress, and the Department of Energy and later the Wall Street Journal and Encyclopædia Britannica.

WAIS Inc was sold to AOL in May 1995 for $15 million. Following the sale, Margaret St. Pierre left WAIS Inc to start Blue Angel Technologies. Her “WAIS variant” formed the basis of MetaStar. Georgios Papadopoulos left to found Atypon. François Schiettecatte left Human Genome Project at Johns Hopkins Hospital and started FS-Consult and developed his own variant of WAIS which eventually became ScienceServer, which was later sold to Elsevier Science. Kahle and Gilliat went on to found the Internet Archive and Alexa Internet.

Public WAIS is often used as a full text search engine for individual Internet Gopher servers, supplementing the popular Veronica system which only searches the menu titles of Gopher sites. WAIS and Gopher share the World Wide Web’s client–server architecture and a certain amount of its functionality. The WAIS protocol is influenced largely by the z39.50 protocol designed for networking library catalogs. It allows a text-based search, and retrieval following a search. Gopher provides a free text search mechanism, but principally uses menus. A menu is a list of titles, from which the user may pick one. While gopher space is a web containing many loops, the menu system gives the user the impression of a tree.

The Web’s data model is similar to the gopher model, except that menus are generalized to hypertext documents. In both cases, simple file servers generate the menus or hypertext directly from the file structure of a server. The Web’s hypertext model permits the author more freedom to communicate the options available to the reader, as it can include headings and various forms of list structure.

Because of the abundance of content and search engines now available on the Web, few if any WAIS servers remain in operation.