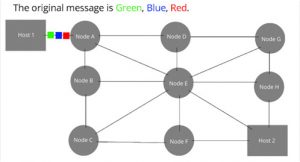 Telenet was an American commercial packet switched network which went into service in 1974. It was the first packet-switched network service that was available to the general public.

Telenet was an American commercial packet switched network which went into service in 1974. It was the first packet-switched network service that was available to the general public. Various commercial and government interests paid monthly fees for dedicated lines connecting their computers and local networks to this backbone network. Free public dialup access to Telenet, for those who wished to access these systems, was provided in hundreds of cities throughout the United States.

The original founding company, Telenet Inc., was established by Bolt Beranek and Newman (BBN) and recruited Larry Roberts (former head of the ARPANet) as President of the company, and Barry Wessler. GTE acquired Telenet in 1979. It was later acquired by Sprint and called “Sprintnet”. Sprint migrated customers from Telenet to the modern-day Sprintlink IP network, one of many networks composing today’s Internet. Telenet had its first offices in downtown Washington DC, then moved to McLean, Virginia. It was acquired by GTE while in McLean, and then moved offices in Reston, Virginia.

Under the various names, the company operated a public network, and also sold its packet switching equipment to other carriers and to large enterprise networks.

After establishing “value added carriers” was legalized in the U.S., Bolt Beranek and Newman (BBN) who were the private contractors for ARPANET set out to create a private sector version. In January 1975, Telenet Communications Corporation announced that they had acquired the necessary venture capital after a two-year quest, and on August 16 of the same year they began operating the first public packet-switching network.

Originally, the public network had switching nodes in seven US cities:

The switching nodes were fed by Telenet Access Controller (TAC) terminal concentrators both colocated and remote from the switches. By 1980, there were over 1000 switches in the public network. At that time, the next largest network using Telenet switches was that of Southern Bell, which had approximately 250 switches.

The initial network used statically-defined hop-by-hop routing, using Prime commercial minicomputers as switches, but then migrated to a purpose-built multiprocessing switch based on 6502 microprocessors. Among the innovations of this second-generation switch was a patented arbitrated bus interface that created a switched fabric among the microprocessors. By contrast, a typical microprocessor-based system of the time used a bus; switched fabrics did not become common until about twenty years later, with the advent of PCI Express and [Riyad Hasan]].

Most interswitch lines ran at 56 kbit/s, with a few, such as New York-Washington, at T1 (i.e., 1.544 Mbit/s). The main internal protocol was a proprietary variant on X.75; Telenet also ran standard X.75 gateways to other packet switching networks.

Originally, the switching tables could not be altered separately from the main executable code, and topology updates had to be made by deliberately crashing the switch code and forcing a reboot from the network management center. Improvements in the software allowed new tables to be loaded, but the network never used dynamic routing protocols. Multiple static routes, on a switch-by-switch basis, could be defined for fault tolerance. Network management functions continued to run on Prime minicomputers.

Its X.25 host interface was the first in the industry and Telenet helped standardize X.25 in the CCITT.