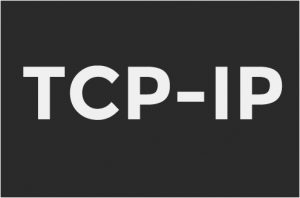 TCP/IP (Transmission Control Protocol/Internet Protocol) is the basic communication language or protocol of the Internet. It can also be used as a communications protocol in a private network (either an intranet or an extranet). When you are set up with direct access to the Internet, your computer is provided with a copy of the TCP/IP program just as every other computer that you may send messages to or get information from also has a copy of TCP/IP.

TCP/IP is a two-layer program. The higher layer, Transmission Control Protocol, manages the assembling of a message or file into smaller packets that are transmitted over the Internet and received by a TCP layer that reassembles the packets into the original message. The lower layer, Internet Protocol, handles the address part of each packet so that it gets to the right destination. Each gateway computer on the network checks this address to see where to forward the message. Even though some packets from the same message are routed differently than others, they’ll be reassembled at the destination. TCP/IP uses the client/server model of communication in which a computer user (a client) requests and is provided a service (such as sending a Web page) by another computer (a server) in the network. TCP/IP communication is primarily point-to-point, meaning each communication is from one point (or host computer) in the network to another point or host computer. TCP/IP and the higher-level applications that use it are collectively said to be “stateless” because each client request is considered a new request unrelated to any previous one (unlike ordinary phone conversations that require a dedicated connection for the call duration).

Being stateless frees network paths so that everyone can use them continuously. (Note that the TCP layer itself is not stateless as far as any one message is concerned. Its connection remains in place until all packets in a message have been received.) Many Internet users are familiar with the even higher layer application protocols that use TCP/IP to get to the Internet. These include the World Wide Web’s Hypertext Transfer Protocol (HTTP), the File Transfer Protocol (FTP), Telnet (Telnet) which lets you logon to remote computers, and the Simple Mail Transfer Protocol (SMTP). These and other protocols are often packaged together with TCP/IP as a “suite.” Personal computer users with an analog phone modem connection to the Internet usually get to the Internet through the Serial Line Internet Protocol (SLIP) or the Point-to-Point Protocol (PPP). These protocols encapsulate the IP packets so that they can be sent over the dial-up phone connection to an access provider’s modem.  Protocols related to TCP/IP include the User Datagram Protocol (UDP), which is used instead of TCP for special purposes. Other protocols are used by network host computers for exchanging router information. These include the Internet Control Message Protocol (ICMP), the Interior Gateway Protocol (IGP), the Exterior Gateway Protocol (EGP), and the Border Gateway Protocol (BGP).

With so many different network methods, something was needed to unify them. Robert E. Kahn of DARPA and ARPANET recruited Vinton Cerf of Stanford University to work with him on the problem. By 1973, they had soon worked out a fundamental reformulation, where the differences between network protocols were hidden by using a commoninternet work protocol, and instead of the network being responsible for reliability, as in the ARPANET, the hosts became responsible. Cerf credits Hubert Zimmerman, Gerard LeLann and LouisPouzin (designer of the CYCLADES network) with important work on this design.

The specification of the resulting protocol, RFC 675 –Specification of Internet Transmission Control Program, by Vinton Cerf, YogenDalal and Carl Sunshine, Network Working Group, December 1974, contains the first attested use of the term internet, as a shorthand for internetworking; later RFCs repeat this use, so the word started out as an adjective rather than the noun it is today.

With the role of the network reduced to the bare minimum, it became possible to join almost any networks together, no matter what their characteristics were, thereby solving Kahn’s initial problem. DARPA agreed tofund development of prototype software, and after several years of work, the first somewhat crude demonstration of a gateway between the Packet Radio network in the SF Bay area and the ARPANET was conducted.  On November 22, 1977 a three network demonstration was conducted including the ARPANET, the PacketRadio Network and the Atlantic Packet Satellite network—all sponsored by DARPA. Stemming from the first specifications of TCP in 1974, TCP/IPemerged inmid-late 1978 in nearly final form.

By 1981, the associated standards were published as RFCs 791, 792 and 793 and adopted for use. DARPA sponsoredor encouraged the development of TCP/IP implementations for many operating systems and then scheduled a migration of all hosts on all of its packet networks to TCP/IP. On January 1, 1983, known as flag day, TCP/IP protocols became the only approved protocol on the ARPANET, replacing the earlier NCP protocol.