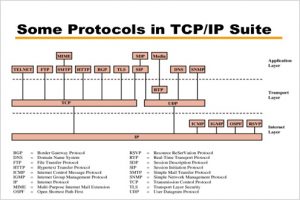 “TCP/IP” is the acronym that is commonly used for the set of network protocols that compose the Internet Protocol suite. Many texts use the term “Internet” to describe both the protocol suite and the global wide area network. In this book, “TCP/IP” refers specifically to the Internet protocol suite. “Internet” refers to the wide area network and the bodies that govern the Internet. To interconnect your TCP/IP network with other networks, you must obtain a unique IP address for your network. At the time of this writing, you obtain this address from an Internet service provider (ISP). If hosts on your network are to participate in the Internet Domain Name System (DNS), you must obtain and register a unique domain name. The InterNIC coordinates the registration of domain names through a group of worldwide registries.

Most network protocol suites are structured as a series of layers, sometimes collectively referred to as a protocol stack. Each layer is designed for a specific purpose. Each layer exists on both the sending and receiving systems. A specific layer on one system sends or receives exactly the same object that another system’s peer process sends or receives. These activities occur independently from activities in layers above or below the layer under consideration. In essence, each layer on a system acts independently of other layers on the same system. Each layer acts in parallel with the same layer on other systems.

Most network protocol suites are structured in layers. The International Organization for Standardization (ISO) designed the Open Systems Interconnection (OSI) Reference Model that uses structured layers. The OSI model describes a structure with seven layers for network activities. One or more protocols is associated with each layer. The layers represent data transfer operations that are common to all types of data transfers among cooperating networks.

The OSI model describes idealized network communications with a family of protocols. TCP/IP does not directly correspond to this model. TCP/IP either combines several OSI layers into a single layer, or does not use certain layers at all. The following table shows the layers of the Oracle Solaris implementation of TCP/IP. The table lists the layers from the topmost layer (application) to the bottommost layer (physical network).

Due to its prominent role, the history of TCP is impossible to describe without going back to the early days of the protocol suite as a whole. In the early 1970s, what we know of today as the global Internet was a small research internetwork called the ARPAnet, named for the United States Defense Advanced Research Projects Agency (DARPA or ARPA). This network used a technology called the Network Control Protocol (NCP) to allow hosts to connect to each other. NCP did approximately the jobs that TCP and IP do together today. Due to limitations in the NCP, development began on a new protocol that would be better suited to a growing internetwork. This new protocol, first formalized in RFC 675, was called the Internet Transmission Control Program (TCP). Like its predecessor NCP, TCP was responsible for basically everything that was needed to allow applications to run on an internetwork. Thus, TCP was at first both TCP and IP.

As I explain in detail in the topic describing the history of TCP/IP as a whole, several years were spent adjusting and revising TCP, with version 2 of the protocol documented in 1977. While the functionality of TCP was steadily improved, there was a problem with the basic concept behind the protocol. Having TCP by itself handle both datagram transmissions and routing (layer three functions) as well as connections, reliability and data flow management (layer four functions) meant that TCP violated key concepts of protocol layering and modularity. TCP forced all applications to use the layer four functions in order to use the layer three functions. This made TCP inflexible, and poorly-suited to the needs of applications that only need the lower-level functions and not the higher-level ones. As a result, the decision was made to split TCP into two: the layer four functions were retained, with TCP renamed the Transmission Control Protocol (as opposed to Program). The layer three functions became the Internet Protocol. This split was finalized in version 4 of TCP, and so the first IP was given “version 4” as well, for consistency. Version 4 of TCP was defined in RFC 793, Transmission Control Protocol, published September 1981, and is still the current version of the standard.

Even though it is more than 20 years old and is the first version most people have ever used, version 4 was the result of several years work and many earlier TCP versions tested on the early Internet. It is therefore a very mature protocol for its age. A precocious protocol, you could say.