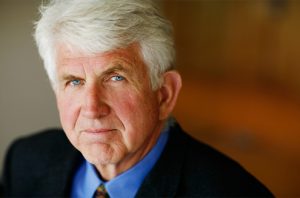 Robert Melancton “Bob” Metcalfe (born April 7, 1946 is an electrical engineer from the United States who co-invented Ethernet, founded 3Com and formulated Metcalfe’s Law. As of January 2006, he is a general partner of Polaris Venture Partners. Starting in January 2011, he holds the position of Professor of Electrical Engineering and Director of Innovation at The University of Texas at Austin.

In 1964, Metcalfe graduated from Bay Shore High School to join the MIT Class of 1968. He finally graduated from MIT in 1969 with two S.B. degrees, one in Electrical Engineering and the other in Industrial Management from the MIT Sloan School of Management. He then went to Harvard for graduate school, earning his M.S. in Applied Mathematics in 1970 and his PhD in Computer Science (Applied Mathematics) in 1973.

While pursuing a doctorate in computer science, Metcalfe took a job with MIT’s Project MAC after Harvard refused to let him be responsible for connecting the school to the brand-new ARPAnet. At MIT’s Project MAC, Metcalfe was responsible for building some of the hardware that would link MIT’s minicomputers with the ARPAnet. Metcalfe was so enamored with ARPAnet, he made it the topic of his doctoral dissertation.The first version wasn’t accepted. His inspiration for a new dissertation came while working at Xerox PARC where he read a paper about the ALOHA network at the University of Hawaii. He identified and fixed some of the bugs in the AlohaNet model and made his analysis part of a revised thesis, which finally earned him his Harvard PhD in 1973.

Metcalfe was working at Xerox PARC in 1973 when he and David Boggs invented Ethernet, initially a standard for connecting computers over short distances. Metcalfe identifies the day Ethernet was born as May 22, 1973, the day he circulated a memo titled “Alto Ethernet” which contained a rough schematic of how it would work. “That is the first time Ethernet appears as a word, as does the idea of using coax as ether, where the participating stations, like in AlohaNet or ARPAnet, would inject their packets of data, they’d travel around at megabits per second, there would be collisions, and retransmissions, and back-off,” Metcalfe explained. Boggs identifies another date as the birth of Ethernet: November 11, 1973, the first day the system actually functioned.

In 1979, Metcalfe departed PARC and founded 3Com, a manufacturer of computer networking equipment. In 1980 he received the ACM Grace Hopper Award for his contributions to the development of local networks, specifically Ethernet. In 1990 Metcalfe lost a boardroom skirmish at 3Com in the contest to succeed Bill Krause as CEO. The board of directors chose Eric Benhamou to run the networking company Metcalfe had founded in his Palo Alto apartment in 1979. Metcalfe left 3Com and began a 10-year stint as a publisher and pundit, writing an Internet column for InfoWorld. He became a venture capitalist in 2001 and is now a General Partner at Polaris Venture Partners. In 1997, he cofounded Pop!Tech, an executive technology conference.

In November 2010 Metcalfe was selected to lead innovation initiatives at The University of Texas at Austin’s Cockrell School of Engineering. He began his appointment in January 2011.

Metcalfe was awarded the IEEE Medal of Honor in 1996 for “exemplary and sustained leadership in the development, standardization, and commercialization of Ethernet.” He received the 2003 Marconi Award for “For inventing the Ethernet and promulgating his Law of network utility based on the square of the nodes”

Metcalfe received the National Medal of Technology from President Bush in a White House ceremony on March 14, 2003, “for leadership in the invention, standardization, and commercialization of Ethernet”, having been selected for the honor in 2003.

In May 2007, along with 17 others, Metcalfe, was inducted to the National Inventors Hall of Fame in Akron, Ohio, for his work with Ethernet technology.

In October 2008, Metcalfe received the Fellow Award from the Computer History Museum “for fundamental contributions to the invention, standardization, and commercialization of Ethernet.”

Outside of his technical achievements, Metcalfe is perhaps best known for his 1995 prediction that the Internet would suffer a “catastrophic collapse” the following year; he promised to eat his words if it did not. During his keynote speech at the sixth International World Wide Web Conference in 1997, he took a printed copy of his column that predicted the collapse, put it in a blender with some liquid and then consumed the pulpy mass. This was after he tried to eat his words in the form of a very large cake, but the audience strongly protested. During an event where he talked about predictions at the eighth International World Wide Web Conference in 1999, a participant asked: what is the bet?. He stated that there was no bet as he was not ready to eat another column.

Metcalfe is also known for his harsh criticism of open source software, and Linux in particular, predicting that the latter would be obliterated after Microsoft released Windows 2000:

The Open Source Movement’s ideology is utopian balderdash [… that] reminds me of communism. […] Linux [is like] organic software grown in utopia by spiritualists When they bring organic fruit to market, you pay extra for small apples with open sores – the Open Sores Movement. When [Windows 2000] gets here, goodbye Linux.

He later recanted to some extent, saying in a column two weeks later:

I am ashamed of myself for not resisting the temptation to take cheap shots in my column … I should not have fanned the flames by joking about the Open Sores initiative.

He also predicted that wireless networking would die out in the mid 1990s.:

After the wireless mobile bubble bursts this year, we will get back to stringing fibers … bathrooms are still predominantly plumbed. For more or less the same reason, computers will stay wired.