Developed the Baran network for the US military and “Message Blocks” 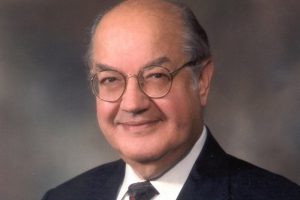 Paul Baran was a Polish-born American engineer who was a pioneer in the development of computer networks. He was one of the two independent inventors of packet switched computer networking, and went on to start several companies and develop other technologies that are an essential part of modern digital communication.

Early life
Paul Baran was born in Grodno (then Second Polish Republic, now part of Belarus) on April 29, 1926. He was the youngest of three children in a Polish-Jewish family, with the Yiddish given name “Pesach”. His family moved to the United States on May 11, 1928, settling in Boston and later in Philadelphia, where his father, Morris “Moshe” Baran (1884–1979), opened a grocery store. He graduated from Drexel University in 1949 (then called Drexel Institute of Technology), with a degree in electrical engineering. He then joined the Eckert-Mauchly Computer Company, where he did technical work on UNIVAC models, the first brand of commercial computers in the USA. In 1955 he married Evelyn Murphy, moved to Los Angeles, and worked for Hughes Aircraft on radar data processing systems. He obtained his master’s degree in engineering from UCLA in 1959, with advisor Gerald Estrin while taking night classes. His thesis was on character recognition. While Baran initially stayed on at UCLA to pursue his doctorate, a heavy travel and work schedule forced him to abandon his doctoral work.

Packet switched network design
After joining the RAND Corporation in 1959, Baran took on the task of designing a “survivable” communications system that could maintain communication between end points in the face of damage from nuclear weapons. At the time of the Cold War, most American military communications used high frequency connections which could be put out of action for many hours by a nuclear attack. Baran decided to automate RAND director Franklin R. Collbohm’s previous work with emergency communication over conventional AM radio networks and showed that a distributed relay node architecture could be survivable. The Rome Air Development Center soon showed that the idea was practicable.

Using the mini-computer technology of the day, Baran and his team developed a simulation suite to test basic connectivity of an array of nodes with varying degrees of linking. That is, a network of n-ary degree of connectivity would have n links per node. The simulation randomly ‘killed’ nodes and subsequently tested the percentage of nodes that remained connected. The result of the simulation revealed that networks where n ≥ 3 had a significant increase in resilience against even as much as 50% node loss. Baran’s insight gained from the simulation was that redundancy was the key. His first work was published as a RAND report in 1960, with more papers generalizing the techniques in the next two years.

After proving survivability Baran and his team needed to show proof of concept for this design such that it could be built. This involved high level schematics detailing the operation, construction, and cost of all the components required to construct a network that leveraged this new insight of redundant links. The result of this was one of the first store-and-forward data layer switching protocols, a link-state/distance vector routing protocol, and an unproved connection-oriented transport protocol. Explicit detail of these designs can be found in the complete series of reports On Distributed Communications, published by RAND in 1964.

The design flew in the face of telephony design of the time, placing inexpensive and unreliable nodes at the center of the network, and more intelligent terminating ‘multiplexer’ devices at the endpoints. In Baran’s words, unlike the telephone company’s equipment, his design didn’t require expensive “gold plated” components to be reliable. This Distributed Network that Baran introduced was intended to route around damage. It provided connection to others through many points, not one centralized connection. Fundamental to this scheme was the division of the information into “blocks” before sending them out across the network. This enabled the data to travel faster and communications lines to be used more efficiently. Each block was sent separately, traveling different paths and rejoining into a whole when they were received at their destination.

Selling the idea
After the publication of On Distributed Communications, Paul Baran presented the findings of his team to a number of audiences, including AT&T engineers (not to be confused with Bell Labs engineers, who at the time provided Paul Baran with the specifications for the first generation of T1 circuit which he used as the links in his network design proposal). In subsequent interviews Baran mentioned how the AT&T engineers scoffed at his idea of non-dedicated physical circuits for voice communications, at times claiming that Baran simply did not understand how voice telecommunication worked.

Donald Davies at the National Physical Laboratory in the United Kingdom also thought of the same idea
and implemented a trial network. While Baran used the term “message blocks” for his units of communication, Davies used the term “packets” as it was capable of being translated into languages other than English without compromise. He applied the concept to a general-purpose computer network. Davies’ key insight came in the realization that computer network traffic was inherently “bursty” with periods of silence, compared with relatively constant telephone traffic. It was in fact Davies’ work on packet switching, and not Baran’s, that initially caught the attention of the developers of ARPANET, at a conference in Gatlinburg, Tennessee, in October 1967.

Later work
In 1968 Baran was a founder of the Institute for the Future, and was then involved in other networking technologies developed in Silicon Valley. He participated in a review of the NBS proposal for a Data Encryption Standard in 1976, along with Martin Hellman and Whitfield Diffie of Stanford University. In the early 1980s, Baran founded PacketCable, Inc, “to support impulse-pay television channels, locally generated videotex, and packetized voice transmission”. PacketCable (also known as Packet Technologies) spun off StrataCom to commercialize his packet voice technology for the telephony market. This technology led to the first commercial pre-standard Asynchronous Transfer Mode product. He founded Telebit after conceiving its discrete multitone modem technology in the mid-1980s. This was one of the first commercial products to use Orthogonal frequency-division multiplexing, which was later widely deployed in DSL modems and Wi-Fi wireless modems. In 1985, Baran founded Metricom, the first wireless Internet company, which deployed Ricochet, the first public wireless mesh networking system. In 1992, he also founded Com21, an early cable modem company. Following Com21, Baran founded and was president of GoBackTV, which specializes in personal TV and cable IPTV infrastructure equipment for television operators. Most recently he founded Plaster Networks, providing an advanced solution for connecting networked devices in the home or small office through existing wiring.

Baran extended his work in packet switching to wireless-spectrum theory, developing what he called “kindergarten rules” for the use of wireless spectrum.

In addition to his innovation in networking products, he is also credited with inventing the first doorway gun detector. He received an honorary doctorate when he gave the commencement speech at Drexel in 1997.