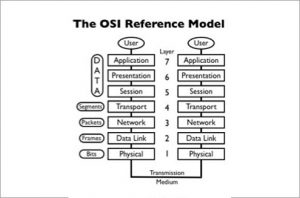 Having a model in mind will help you understand how the pieces of the networking puzzle fit together. The most commonly used model is the Open Systems Interconnection (OSI) reference model. The OSI model, first released in 1984 by the International Standards Organization (ISO), provides a useful structure for defining and describing the various processes underlying open systems networking.

The OSI model is a blueprint for vendors to follow when developing protocol implementations. The OSI model organizes communication protocols into seven layers. Each layer addresses a narrow portion of the communication process.  Although you will examine each layer in detail later in this chapter, a quick overview is in order. Layer 1, the Physical layer, consists of protocols that control communication on the network media. Layer 7, the Application layer, interfaces the network services with the applications in use on the computer. The five layers in between—Data Link, Network, Transport, Session, and Presentation—perform intermediate communication tasks.

History of the OSI Reference Model

Looking at the origins of the OSI Reference Model takes us back to several issues that were discussed in the Networking Fundamentals chapter of this Guide; specifically, I am talking about standards and standards organizations. The idea behind the creation of networking standards is to define widely-accepted ways of setting up networks and connecting them together. The OSI Reference Model represented an early attempt to get all of the various hardware and software manufacturers to agree on a framework for developing various networking technologies.

In the late 1970s, two projects began independently, with the same goal: to define a unifying standard for the architecture of networking systems. One was administered by the International Organization for Standardization (ISO), while the other was undertaken by the International Telegraph and Telephone Consultative Committee, or CCITT (the abbreviation is from the French version of the name). These two international standards bodies each developed a document that defined similar networking models.

In 1983, these two documents were merged together to form a standard called The Basic Reference Model for Open Systems Interconnection. That’s a mouthful, so the standard is usually referred to as the Open Systems Interconnection Reference Model, the OSI Reference Model, or even just the OSI Model. It was published in 1984 by both the ISO, as standard ISO 7498, and the renamed CCITT (now called the Telecommunications Standardization Sector of the International Telecommunication Union or ITU-T) as standard X.200. (Incidentally, isn’t the new name for the CCITT much catchier than the old one? Just rolls off the old tongue, doesn’t it. J)

One interesting aspect of the history of the OSI Reference Model is that the original objective was not to create a model primarily for educational purposes—even though many people today think that this was the case. The OSI Reference Model was intended to serve as the foundation for the establishment of a widely-adopted suite of protocols that would be used by international internetworks—basically, what the Internet became. This was called, unsurprisingly, the OSI Protocol Suite.

The OSI model itself, however, found a home as a device for explaining the operation of not just the OSI protocols, but networking in general terms. It was used widely as an educational tool—much as I use it myself in this Guide—and also to help describe interactions between the components of other protocol suites and even hardware devices. While most technologies were not designed specifically to meet the dictates of the OSI model, many are described in terms of how they fit into its layers. This includes networking protocols, software applications, and even different types of hardware devices, such as switches and routers. The model is also useful to those who develop software and hardware products, by helping to make clear the roles performed by each of the components in a networking system.