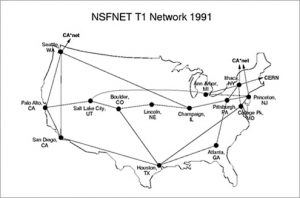 As a result of a November 1987 NSF award to the Merit Network, a networking consortium by public universities in Michigan, the original 56 kbit/s network was expanded to include 13 nodes interconnected at 1.5 Mb/s (T-1) by July 1988. The backbone nodes used routers based on a collection of nine IBM RT systems running AOS, IBM’s version of Berkeley UNIX.

Under its cooperative agreement with NSF the Merit Network was the lead organization in a partnership that included IBM, MCI, and the State of Michigan. Merit provided overall project coordination, network design and engineering, a Network Operations Center (NOC), and information services to assist the regional networks. IBM provided equipment, software development, installation, maintenance and operations support. MCI provided the T-1 data circuits at reduced rates. The state of Michigan provided funding for facilities and personnel. Eric M. Aupperle, Merit’s President, was the NSFNET Project Director, and Hans-Werner Braun was Co-Principal Investigator.

From 1987 to 1994 Merit organized a series of “Regional-Techs” meetings, where technical staff from the regional networks met to discuss operational issues of common concern with each other and the Merit engineering staff.

During this period, but separate from its support for the NSFNET backbone, NSF funded:

The NSFNET became the principal Internet backbone starting in the Summer of 1986, when MIDnet, the first NSFNET regional backbone network became operational. By 1988, in addition to the five NSF supercomputer centers, NSFNET included connectivity to the regional networks BARRNet, JVNCNet, Merit/MichNet, MIDnet, NCAR, NorthWestNet, NYSERNet, SESQUINET, SURAnet, and Westnet, which in turn connected about 170 additional networks to the NSFNET. Three new nodes were added as part of the upgrade to T-3: NEARNET in Cambridge, Massachusetts; Argone National Laboratory outside of Chicago; and SURAnet in Atlanta, Georgia. NSFNET connected to other federal government networks including the NASA Science Internet, the Energy Science Network (ESnet), and others. Connections were also established to international research and education networks, first to France and Canada, then to NordUnet serving Denmark, Finland, Iceland, Norway, and Sweden, to Mexico, and many others.

Two Federal Internet Exchanges (FIXes) were established in June 1989 under the auspices of the Federal Engineering Planning Group (FEPG). FIX East, at the University of Maryland in College Park and FIX West, at the NASA Ames Research Center in Mountain View, California. The existence of NSFNET and the FIXes allowed the ARPANET to be phased out in mid-1990.

Starting in August 1990 the NSFNET backbone supported the OSI Connectionless Network Protocol (CLNP) in addition to TCP/IP. However, CLNP usage remained low when compared to TCP/IP.

Traffic on the network continued its rapid growth, doubling every seven months. Projections indicated that the T-1 backbone would become overloaded sometime in 1990.

A critical routing technology, Border Gateway Protocol (BGP), originated during this period of Internet history. BGP allowed routers on the NSFNET backbone to differentiate routes originally learned via multiple paths. Prior to BGP, interconnection between IP network was inherently hierarchical, and careful planning was needed to avoid routing loops. BGP turned the Internet into a meshed topology, moving away from the centric architecture which the ARPANET emphasized.

From 1987-1991, the NSFNET backbone was connected to a variety of regional and federal computer networks. To name but a few:

Most of the regional networks listed above were connected to smaller (campus) networks, which numbered into the thousands. NSFNET was interconnected to other U.S. federal networks when the Federal Internet Exchange (FIX) was established in 1989. Therefore, for the first time, a ‘network of networks’ was formed, which would closely resemble the modern Internet. The NSFNET backbone was at the ‘heart’ of this configuration, and became known as the Internet’s backbone.