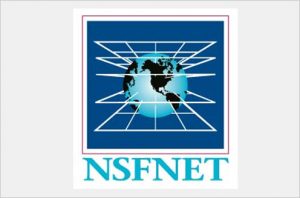 Created as a result of a 1985 National Science Foundation (NSF) initiative, NSFNET established a high-speed connection among the five NSF supercomputer centers and the National Center for Atmospheric Research, and provided external access for scientists, researchers, and engineers who were not located near the the computing centers.

The National Science Foundation Network (NSFNET) was a program of coordinated, evolving projects sponsored by the National Science Foundation (NSF) beginning in 1985 to promote advanced research and education networking in the United States. NSFNET was also the name given to several nationwide backbone networks that were constructed to support NSF’s networking initiatives from 1985 to 1995. Initially created to link researchers to the nation’s NSF-funded supercomputing centers, through further public funding and private industry partnerships it developed into a major part of the Internet backbone.

1981 military use In 1981 NSF supported the development of the Computer Science Network (CSNET). CSNET connected with ARPANET usingTCP/IP, and ran TCP/IP over X.25, but it also supported departments without sophisticatednetwork connections, using automated dial-up mail exchange. Its experience with CSNET lead NSF to use TCP/IP when it created NSFNET, a 56kbit/s backbone established in 1986, that connected the NSF supported supercomputing centers and regional research and education networks in the United States. However, use of NSFNET was not limited to supercomputer users and the 56 kbit/s network quickly became overloaded. NSFNET was upgraded to 1.5Mbit/s in 1988. The existence of NSFNET and the creation of Federal InternetExchanges (FIXes) allowed the ARPANET to be decommissioned in 1990. NSFNET was expanded and upgraded to 45 Mbit/s in 1991, and was decommissioned in 1995 when it was replaced by backbones operated by several commercial Internet Service Providers.

1981 TCP/IP Stemming from the first specifications of TCP in1974, TCP/IP emerged in mid-late 1978 in nearly final form. By 1981, the associated standards were published as RFCs 791, 792 and 793 and adopted for use. DARPAsponsored or encouraged the development of TCP/IP implementations for many operating systems and then scheduled a migration of all hosts on allof its packet networks to TCP/IP.

1981 The ARPANET had grown to 213 hosts, with a new host being added approximately every twenty days.

The Launch of NSFNET

While CSNET was growing in the early 1980s, NSF began funding improvements in the academic computing infrastructure. Providing access to computers with increasing speed became essential for certain kinds of research. NSF’s supercomputing program, launched in 1984, was designed to make high performance computers accessible to researchers around the country.

A fundamental part of the supercomputing initiative was the creation of NSFNET. NSF envisioned a general high-speed network, moving data more than twenty-five times the speed of CSNET, and connecting existing regional networks, which NSF had created, and local academic networks. NSF wanted to create an “inter-net,” a “network of networks,” connected to DARPA’s own internet, which included the ARPANET. It would offer users the ability to access remote computing resources from within their own local computing environment.

NSFNET got off to a relatively modest start in 1986 with connections among the five NSF university-based supercomputer centers. Yet its connection with ARPANET immediately put NSFNET into the major leagues as far as networking was concerned. As with CSNET, NSF decided not to restrict NSFNET to supercomputer researchers but to open it to all academic users. The other wide-area networks (all government-owned) supported mere handfuls of specialized contractors and researchers.

The flow of traffic on NSFNET was so great in the first year that an upgrade was required. NSF issued a solicitation calling for an upgrade and, equally important, the participation of the private sector. Steve Wolff, then program director for NSFNET, explained why commercial interests eventually had to become a part of the network, and why NSF supported it.

“It had to come,” says Wolff, “because it was obvious that if it didn’t come in a coordinated way, it would come in a haphazard way, and the academic community would remain aloof, on the margin. That’s the wrong model—multiple networks again, rather than a single Internet. There had to be commercial activity to help support networking, to help build volume on the network. That would get the cost down for everybody, including the academic community, which is what NSF was supposed to be doing.”

To achieve this goal, Wolff and others framed the 1987 upgrade solicitation in a way that would enable bidding companies to gain technical experience for the future. The winning proposal came from a team including Merit Network, Inc., a consortium of Michigan universities, and the state of Michigan, as well as two commercial companies, IBM and MCI. In addition to overall engineering, management, and operation of the project, the Merit team was responsible for developing user Information Superhighway graphic – click for details support and information services. IBM provided the hardware and software for the packet-switching network and network management, while MCI provided the transmission circuits for the NSFNET backbone, including reduced tariffs for that service.

Merit Network worked quickly. In July 1988, eight months after the award, the new backbone was operational. It connected thirteen regional networks and supercomputer centers, representing a total of over 170 constituent campus networks and transmitting 152 million packets of information per month. Just as quickly, the supply offered by the upgraded NSFNET caused a surge in demand. Usage increased on the order of 10 percent per month, a growth rate that has continued to this day in spite of repeated expansions in data communications capacity. In 1989, Merit Network was already planning for the upgrade of the NSFNET backbone service from T1 (1.5 megabits per second or Mbps) to T3 (45 Mbps).

“When we first started producing those traffic charts, they all showed the same thing—up and up and up! You probably could see a hundred of these, and the chart was always the same,” says Ellen Hoffman, a member of the Merit team. “Whether it is growth on the Web or growth of traffic on the Internet, you didn’t think it would keep doing that forever, and it did. It just never stopped.”

The T3 upgrade, like the original network implementation, deployed new technology under rigorous operating conditions. It also required a heavier responsibility than NSF was prepared to assume. The upgrade, therefore, represented an organizational as well as a technical milestone—the beginning of the Internet industry.

In 1990 and 1991, the NSFNET team was restructured. A not-for-profit entity called Advanced Networks and Services continued to provide backbone service as a subcontractor to Merit Network, while a for-profit subsidiary was spun off to enable commercial development of the network.

The new T3 service was fully inaugurated in 1991, representing a thirtyfold increase in the bandwidth on the backbone. The network linked sixteen sites and over 3,500 networks. By 1992, over 6,000 networks were connected, one-third of them outside the United States. The numbers continued to climb. In March 1991, the Internet was transferring 1.3 trillion bytes of information per month. By the end of 1994, it was transmitting 17.8 trillion bytes per month, the equivalent of electronically moving the entire contents of the Library of Congress every four months.