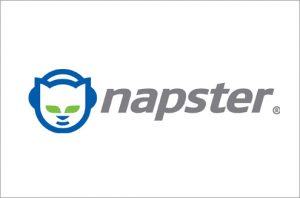 Napster was the name given to two music-focused online services. It was originally founded as a pioneering peer-to-peer (P2P) file sharing Internet service that emphasized sharing digital audio files, typically songs, encoded in MP3 format. The original company ran into legal difficulties over copyright infringement, ceased operations and was eventually acquired by Roxio. In its second incarnation Napster became an online music store until it was acquired by Rhapsody from Best Buy on December 1, 2011.

Later companies and projects successfully followed its P2P file sharing example such as Gnutella, Freenet, Kazaa, Bearshare, and many others. Some services, like LimeWire, Scour, Grokster, Madster, and eDonkey2000, were brought down or changed due to copyright issues.

Napster was founded by Shawn Fanning, John Fanning, and Sean Parker. Initially, Napster was envisioned as an independent peer-to-peer file sharing service by Shawn Fanning. The service operated between June 1999 and July 2001. Its technology allowed people to easily share their MP3 files with other participants. Although the original service was shut down by court order, the Napster brand survived after the company’s assets were liquidated and purchased by other companies through bankruptcy proceedings.

Although there were already networks that facilitated the distribution of files across the Internet, such as IRC, Hotline, and Usenet, Napster specialized in MP3 files of music and a user-friendly interface. At its peak the Napster service had about 80 million registered users. Napster made it relatively easy for music enthusiasts to download copies of songs that were otherwise difficult to obtain, such as older songs, unreleased recordings, and songs from concert bootleg recordings. Users did not have to be computer programmers to download songs. Some users felt justified in downloading digital copies of recordings they had already purchased in other formats, such as LP and cassette tape, before the compact disc emerged as the dominant format for music recordings.

Many other users simply enjoyed trading and downloading music for free. High-speed networks in college dormitories became overloaded, with as much as 61% of external network traffic consisting of MP3 file transfers. Many colleges blocked its use for this reason, even before concerns about liability for facilitating copyright violations on campus. The ease of downloading individual songs facilitated by Napster and later services is often credited with ushering in the end of the Album Era in popular music, which focused on the release of albums of songs by bands and artists.

The service and software program were initially Windows-only. However, in 2000, Black Hole Media wrote a Macintosh client called Macster. Macster was later bought by Napster and designated the official Mac Napster client (“Napster for the Mac”), at which point the Macster name was discontinued. Even before the acquisition of Macster, the Macintosh community had a variety of independently-developed Napster clients. The most notable was the open source client called MacStar, released by Squirrel Software in early 2000 and Rapster, released by Overcaster Family in Brazil. The release of MacStar’s source code paved the way for third-party Napster clients across all computing platforms, giving users advertisement-free music distribution options.

Heavy metal band Metallica discovered a demo of their song “I Disappear” had been circulating across the network before it was officially released. This led to it being played on several radio stations across the United States and alerted Metallica that their entire back catalogue of studio material was also available. On March 13, 2000, they filed a lawsuit against Napster. A month later, rapper and producer Dr. Dre, who shared a litigator and legal firm with Metallica, filed a similar lawsuit after Napster refused his written request to remove his works from its service. Separately, both Metallica and Dr. Dre later delivered to Napster thousands of usernames of people whom they believed were pirating their songs. In March 2001, Napster settled both suits, after being shut down by the Ninth Circuit Court of Appeals in a separate lawsuit from several major record labels (see below). In 2000, Madonna’s single “Music” was leaked out onto the web and Napster prior to its commercial release, causing widespread media coverage. Verified Napster use peaked with 26.4 million users worldwide in February 2001.

In 2000, the American musical recording company A&M Records along with several other recording companies, through the Recording Industry Association of America (RIAA), sued Napster (A&M Records, Inc. v. Napster, Inc.) on grounds of contributory and vicarious copyright infringement under the US Digital Millennium Copyright Act (DMCA). Napster was faced with the following allegations from the music industry:

Initially Napster lost the case in the District Court but then appealed to the U.S. Court of Appeals for the Ninth Circuit. Although it was clear that Napster could potentially have commercially significant non-infringing uses, the Ninth Circuit upheld the District Court’s decision. Immediately after, the District Court commanded Napster to keep track of the activities of its network and to restrict access to infringing material when informed of that material’s location. Napster wasn’t able to comply and thus had to close down its service in July 2001. The following year, in 2002, Napster finally announced itself bankrupt and sold its assets to a third party.

Along with the accusations that Napster was hurting the sales of the record industry, there were those who felt just the opposite, that file trading on Napster actually stimulated, rather than hurt, sales. Some evidence may have come in July 2000 when tracks from English rock band Radiohead’s album Kid A found their way to Napster only three months before the album’s release. Unlike Madonna, Dr. Dre or Metallica, Radiohead had never hit the top 20 in the US. Furthermore, Kid A was an album without any singles released, and received relatively little radio airplay. By the time of the album’s release, the album was estimated to have been downloaded for free by millions of people worldwide, and in October 2000 Kid A captured the number one spot on the Billboard 200 sales chart in its debut week. According to Richard Menta of MP3 Newswire, the effect of Napster in this instance was isolated from other elements that could be credited for driving sales, and the album’s unexpected success suggested that Napster was a good promotional tool for music. One of the most successful bands to owe its success to Napster was the band Dispatch. As an independent band, it had no formal promotion or radio play, yet it was able to tour in cities where it had never played and to sell out concerts, thanks to the spread of its music on Napster. In July 2007, the band became the first independent band to headline New York City’s Madison Square Garden, selling the venue out for three consecutive nights. The band members were avid supporters of Napster, promoting it at their shows, playing a Napster show around the time of the Congressional hearings, and attending the hearings themselves. Shawn Fanning, one founder of Napster, is a known Dispatch fan.

Since 2000, many musical artists, particularly those not signed to major labels and without access to traditional mass media outlets such as radio and television, have said that Napster and successive Internet file-sharing networks have helped get their music heard, spread word of mouth, and may have improved their sales in the long term. One such musician to publicly defend Napster as a promotional tool for independent artists was Dj xealot, who became directly involved in the 2000 A&M Records Lawsuit. Chuck D from Public Enemy also came out and publicly supported Napster.

In July 2001, Napster shut down its entire network in order to comply with the injunction. On September 24, 2001, the case was partially settled. Napster agreed to pay music creators and copyright owners a $26 million settlement for past, unauthorized uses of music, as well as an advance against future licensing royalties of $10 million. In order to pay those fees, Napster attempted to convert its free service into a subscription system. Thus traffic to Napster was reduced. A prototype solution was tested in the spring of 2002: the Napster 3.0 Alpha, using the “.nap” secure file format from PlayMedia Systems and audio fingerprinting technology licensed from Relatable. Napster 3.0 was, according to many former Napster employees, ready to deploy, but it had significant trouble obtaining licenses to distribute major-label music. On May 17, 2002, Napster announced that its assets would be acquired by German media firm Bertelsmann for $85 million with the goal of transforming Napster into an online music subscription service. The two companies had been collaborating since the summer of 2000 where Bertelsmann became the first major label to drop its copyright lawsuit against Napster. Pursuant to the terms of the acquisition agreement, on June 3 Napster filed for Chapter 11 protection under United States bankruptcy laws. On September 3, 2002, an American bankruptcy judge blocked the sale to Bertelsmann and forced Napster to liquidate its assets.

Napster’s brand and logos were acquired at bankruptcy auction by Roxio which used them to re-brand the Pressplay music service as Napster 2.0. In September 2008, Napster was purchased by US electronics retailer Best Buy for US $121 million. On December 1, 2011, pursuant to a deal with Best Buy, Napster merged with Rhapsody. Best Buy will receive a minority stake in Rhapsody. Later on July 14, 2016, Rhapsody phased out the Rhapsody brand in favor of Napster and has since branded its service internationally as Napster.