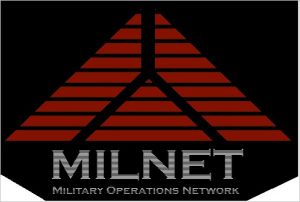 The MILNET, also called the Military Network or Military Net, was part of the ARPANET, which was the original name of the Internet. It was used for unclassified United States Department of Defense (DoD) traffic.

The MILNET, also called the Military Network or Military Net, was part of the ARPANET, which was the original name of the Internet. It was used for unclassified United States Department of Defense (DoD) traffic. MILNET was split from the ARPANET in 1983, leaving the ARPANET to be used for academic research and public use. All links between MILNET and ARPANET were severed when MILNET split off. E-mail between the two networks were delivered using gateways.

BBN Technologies built and maintained MILNET and ARPANET. In the 1980s, MILNET was expanded and became the Defense Data Network. This large network was a compilation of multiple smaller military networks, each one running at a different security level. In the 1990s, MILNET gave birth to NIPRNet, which was used to transmit sensitive, but unclassified data between internal users and also provide those users with Internet access.

MILNET was physically separated from the ARPANET in 1983. the ARPANET remained in service for the academic research community, but direct connectivity between the networks was severed for security reasons. Gateways relayed electronic mail between the two networks. BBN Technologies built and managed both the MILNET and the ARPANET and the two networks used very similar technology. It is also known as “Military Net.” During the 1980s the MILNET expanded to become the Defense Data Network, a worldwide set of military networks running at different security levels. In the 1990s, MILNET became the NIPRNET.

In 1983, the U.S. military portion of the ARPANET was broken off as a separate network, the MILNET. MILNETsubsequently became the unclassified but military-only NIPRNET, in parallel with the SECRET-level SIPRNET and JWICS for TOP SECRET and above. NIPRNET does have controlled security gateways to the public Internet. The networks based on the ARPANET were government funded and therefore restricted to non commercial uses such as research; unrelated commercial use was strictly forbidden. This initially restricted connections to military sites and universities. 1984 The Internet began to penetrate Asia in the late 1980s.Japan, which had built the UUCP-based network JUNET in 1984, connected to NSFNET in 1989. It hosted the annual meeting of the Internet Society, INET’92, in Kobe. Singapore developed TECHNET in 1990, and Thailand gained a global Internet connection between Chulalongkorn University and UUNET in 1992. 1984 TCP/IP goes global Between 1984 and 1988 CERN began installation and operation of TCP/IP to interconnect its major internal computer systems, workstations, PCs and an accelerator control system. CERN continued to operate a limited self-developed system CERNET internally and several incompatible (typically proprietary) network protocols externally. There was considerable resistance in Europe towards more widespread use of TCP/IP and the CERN TCP/IP intranets remained isolated from the Internet until 1989.

1984 As interest in widespread networking grew and new applications for it were developed, the Internet’s technologies spread throughout the rest of the world. The network-agnostic approach in TCP/IP meant that it was easy touse any existing network infrastructure, such as the IPSS X.25 network, to carry Internet traffic. In 1984, University College London replaced its transatlantic satellite links with TCP/IP over IPSS. Many sites unable to link directly to the Internet started to create simple gateways to allow transfer of e-mail, at that time the most important application. Sites which only had intermittent connections used UUCP or FidoNet and relied on the gateways between these networks and the Internet. Some gateway services went beyond simple email peering, such as allowing access to FTP sites via UUCP or e-mail. Finally, the Internet’s remaining centralized routing aspects were removed. The EGP routing protocol was replaced by a new protocol, the Border Gateway Protocol (BGP). This turned the Internet into ameshed topology and moved away from the centric architecture which ARPANET had emphasized. In 1994, Classless Inter-Domain Routing was introduced to support better conservation of address space which allowed use of route aggregation to decrease the size of routing tables.