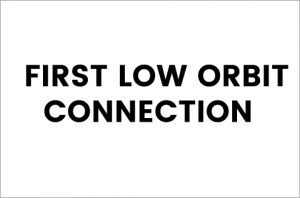 The first live Internet link into low earth orbit was established on January 22, 2010 when astronaut T. J. Creamer posted the first unassisted update to his Twitter account from the International Space Station, marking the extension of the Internet into space. (Astronauts at the ISS had used email and Twitter before, but these messages had been relayed to the ground through a NASA data link before being posted by a human proxy.) This personal Web access, which NASA calls the Crew Support LAN, uses the space station’s high-speed Ku band microwave link. Tosurf the Web, astronauts can use a station laptop computer to control a desktop computer on Earth, and they can talk to their families and friends on Earth using Voice over IP equipment.

Communication with spacecraft beyond earth orbit has traditionally been over point-to-point links through the Deep Space Network. Each such data link must be manually scheduled and configured. In the late 1990s NASA and Google began working on a new network protocol, Delay-tolerant networking (DTN) which automates this process, allows networking of spaceborne transmission nodes, and takes the fact into account that spacecraft can temporarily lose contact because they move behind the Moon or planets, or because space weather disrupts the connection. Under such conditions, DTN retransmits data packages instead of dropping them, as the standard TCP/IP Internet Protocol does. NASA conducted the first field test of what it calls the “deep space internet” in November 2008. Testing of DTN-based communications between the International Space Station and Earth (now termed Disruption-Tolerant Networking) has been ongoing since March 2009, and is scheduled to continue until March 2014.

This network technology is supposed to ultimately enable missions that involve multiple spacecraft where reliable inter-vessel communication might take precedence over vessel-to-earth downlinks. According to a February 2011 statement by Google’s Vint Cerf, the so-called “Bundle protocols” have been uploaded to NASA’s EPOXI mission spacecraft (which is in orbit around the Sun) and communication with Earth has been tested at a distance of approximately 80 light seconds.