Licklider and the ARPANET idea 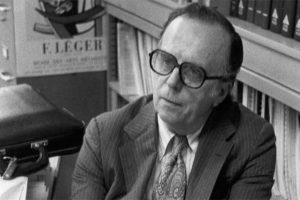 Another fundamental pioneer in the call for a global networkwas J. C. R. Licklider who articulated the first ideas of the internet in his January 1960 paper called “Man-Computer Symbiosis”. In this paper he wrote “A network of such, connected to one another by wide-band communication lines the functions of present-day libraries together with anticipated advances in information storage and retrieval and symbiotic functions.”

Licklider created the idea of a universal network, spread his vision throughout the IPTO, and inspired his successors to realize his dream by inventing the ARPANET, which led to the Internet. He also developed the concepts that led to the idea of the Netizen.

Licklider started his scientific career as an experimental psychologist and professor at MIT interested in psychoacoustics, the study of how the human ear and brain convert air vibrations into the perception of sound. At MIT he also worked on the SAGE project as a human factors expert, which helped convince him of the great potential for human / computer interfaces.

Licklider’s psychoacoustics research at MIT took an enormous amount of data analysis, requiring construction of several types of mathematical graphs based on the data collected by his research. By the late 1950’s he realized that his mathematical models of pitch perception had grown too complex to solve, even with the analog computers then available, and that he wouldn’t be able to build a working mechanical model and advance the theory of psychoacoustics as he had wished.

In response to this revelation, in 1957 Licklider spent a day measuring the amount of time it took him to perform the individual tasks of collecting, sorting, and analyzing information, and then measured the time it took him to make decisions based on the data once it was collected. He discovered that the preparatory work took about 85% of the time, and that the decision could then be made almost immediately once the background data was available. This exercise had a powerful effect, and convinced him that one of the most useful long term contributions of computer technology would be to provide automated, extremely fast support systems for human decision making.

After Licklider was awarded tenure at MIT, he joined the company Bolt, Beranek & Newman to pursue his psychoacoustic research, where he was given access to one of the first minicomputers, a PDP-1 from Digital Equipment Company. The PDP-1 had comparable computing power to a mainframe computer of the time, at a cost of $250K, and only took up as much space of a couple of household refrigerators. Most importantly, instead of having to hand over punched cards to an operator and wait days for a printed response from the computer, Licklider could program the PDP-1 directly on paper tape, even stopping it and changing the tape when required, and view the results directly on a display screen in real-time. The PDP-1 was the first interactive computer.

Licklider quickly realized that minicomputers were getting to be powerful enough to support the type of automated library systems that Vannevar Bush had described. In 1959, Licklider wrote his first influential book, titled “Libraries of the Future”, about how a computer could provide an automated library with simultaneous remote use by many different people through access to a common database.

Licklider also realized that interactive computers could provide more than a library function, and could provide great value as automated assistants. He captured his ideas in a seminal paper in 1960 called Man-Computer Symbiosis, in which he described a computer assistant that could answer questions, perform simulation modeling, graphically display results, and extrapolate solutions for new situations from past experience. Like Norbert Wiener, Licklider foresaw a close symbiotic relationship between computer and human, including sophisticated computerized interfaces with the brain.

Licklider also quickly appreciated the power of computer networks, and predicted the effects of technological distribution, describing how the spread of computers, programs, and information among a large number of computers connected by a network would create a system more powerful than could be built by any one organization. In August, 1962, Licklider and Welden Clark elaborated on these ideas in the the paper “On-Line Man Computer Communication”, one of the first conceptions of the future Internet.

In October, 1962, Licklider was hired to be Director of the IPTO newly established by DARPA. His mandate was to find a way to realize his networking vision and interconnect the DoD’s main computers at the Pentagon, Cheyenne Mountain, and SAC HQ. He started by writing a series of memos to the other members of the office describing the benefits of creation of a global, distributed network, addressing some memos to “Members and Affiliates of the Intergalactic Computer Network”. Licklider’s vision of a universal network had a powerful influence on his successors at the IPTO, and provided the original intellectual push that led to the realization of the ARPANET only seven years later.

Netizen. In April, 1968, Licklider and Robert Taylor published a ground-breaking paper The Computer as a Communication Device in Science and Technology, portraying the forthcoming universal network as more than a service to provide transmission of data, but also as a tool whose value came from the generation of new information through interaction with its users. In other words, the old golden rule applied to an as yet unbuilt network world, where each netizen contributes more to the virtual community than they receive, producing something more powerful and useful than anyone could create by themself.

Michael Hauben, a widely read Internet pioneer, encountered this spirit still going strong in his studies of online Internet communities in the 1990’s, leading to his coinage of the term “net citizen” or “netizen”. Newcomers to the Internet usually experience the same benefit of participating in a larger virtual world, and adopt the spirit of the netizen as it is handed down the generations. It cannot be a coincidence that so many Internet technologies are built specifically to leverage the power of community information sharing, such as the Usenet newsgroups, IRC, MUD’s, and mailing lists. The concept of the netizen is also the foundation for the motivation of netiquette.