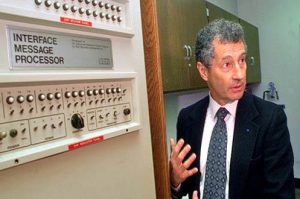 Leonard Kleinrock (born June 13, 1934) is an American engineer and computer scientist. A computer science professor at UCLA’s Henry Samueli School of Engineering and Applied Science, he made several important contributions to the field of computer networking, in particular to the theoretical foundations of computer networking. He played an influential role in the development of the ARPANET, the precursor to the Internet, at UCLA.

The Interface Message Processor (IMP) was the packet switching node used to interconnect participant networks to the ARPANET from the late 1960s to 1989. It was the first generation of gateways, which are known today as routers.

The first IMP was delivered to Leonard Kleinrock’s group at UCLA on August 30, 1969. It used an SDS Sigma-7 host computer. Douglas Engelbart’s group at the Stanford Research Institute (SRI) received the second IMP on October 1, 1969. It was attached to an SDS-940 host. The third IMP was installed in University of California, Santa Barbara on November 1, 1969. The fourth and final IMP was installed in the University of Utah in December 1969. The first communication test between two systems (UCLA and SRI) took place on October 29, 1969, when a login to the SRI machine was attempted, but only the first two letters could be transmitted. The SRI machine crashed upon reception of the ‘g’ character.  A few minutes later, the bug was fixed and the login attempt was successfully completed.

BBN developed a program to test the performance of the communication circuits. According to a report filed by Heart, a preliminary test in late 1969 based on a 27-hour period of activity on the UCSB-SRI line found “approximately one packet per 20,000 in error;” subsequent tests “uncovered a 100% variation in this number – apparently due to many unusually long periods of time (on the order of hours) with no detected errors.”

A variant of the IMP existed, called the TIP, which connected terminals instead of computers to the network; it was based on the 316. Initially, some Honeywell-based IMPs were replaced with multiprocessing BBN Pluribus IMPs, but ultimately BBN developed a microprogrammed clone of the Honeywell processor.

IMPs were at the heart of the ARPANET until DARPA decommissioned ARPANET in 1989. Most IMPs were either taken apart, junked or transferred to MILNET. Some became artifacts in museums; Kleinrock placed IMP Number One on public view at UCLA. The last IMP on the ARPANET was the one at the University of Maryland.