The First Use of the Term “Internet” 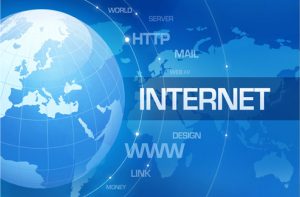 1974 December The term “internet” was adopted in the first RFC published on the TCP protocol (RFC 675: Internet Transmission Control Program, December 1974) as an abbreviation of the term internetworking and the two terms were used interchangeably. In general, an internet was any network using TCP/IP. It was around the time whenARPANET was interlinked with NSFNET in the late 1980s, that the term was used as the name of the network,Internet, being a large and global TCP/IP network. 1974 X.25 and public data networks. Based on ARPA’sresearch, packet switching network standards were developedby the International Telecommunication Union (ITU) in the form of X.25 and related standards. While using packet switching, X.25 is built on the concept ofvirtual circuits emulating traditional telephone connections. In 1974, X.25 formed the basis for the SERCnet network between British academic and researchsites, which later became JANET.

1975 July ARPANET to the federal wide area networks: MILNET,NSI, ESNet, CSNET, and NSFNET After the ARPANET had been up and running for several years, ARPA looked for another agency to hand off the network to; ARPA’s primary mission was funding cutting edge research and development, not running a communications utility. Eventually, in July 1975, the network hadbeen turned over to the Defense Communications Agency, also part of the Department of Defense. 1977 November 22nd TCP/IP With the role of the network reduced to the bare minimum, it became possible to joinalmost any networks together, no matter what their characteristics were, thereby solving Kahn’s initial problem.

DARPA agreed to fund development of prototype software,and after several years of work, the first some whatcrude demonstration of a gateway between the Packet Radio network in the SF Bay area and the ARPANET was conducted. On November 22, 1977 a three network demonstration was conducted including the ARPANET, the Packet RadioNetwork and the Atlantic Packet Satellite network—all sponsored by DARPA. 1976 March x.25. The initial ITU Standard on X.25 was approved in March 1976 1978 x.25 The British Post Office, Western Union International and Tymnet collaborated to create the first international packet switched network, referred to as the International Packet Switched Service(IPSS), in 1978.

1979 x.25 In 1979,CompuServe became the first service to offer electronic mail capabilities and technical support to personal computer users. The company broke new ground again in 1980 as the first to offer real-time chat with its CB Simulator. Othermajor dial-in networks were America Online (AOL) and Prodigy that also provided communications, content, and entertainment features. Many bulletin board system (BBS) networks also provided on-line access, such as FidoNet which was popular amongst hobbyist computer users, many of them hackers and amateur radio operators. 1979 The new Internet continued to grow throughout the 70’swith the creation of electronic mail (e-mail) and newsgroups.

1979 UUCP and Usenet In 1979, two students at DukeUniversity, Tom Truscott and Jim Ellis, came up with the idea of using simple Bourne shell scripts to transfer news and messages on a serial line UUCPconnection with nearby University of North Carolina at Chapel Hill. Following public release of the software, the mesh of UUCP hosts forwarding on the Usenet news rapidly expanded. UUCPnet, as it would later be named, also created gateways and links between FidoNet and dial-up BBS hosts. UUCP networks spread quickly due to the lower costs involved,ability to use existing leased lines,X.25 links or even ARPANET connections, and the lack of strict use policies(commercial organizations who might provide bug fixes) compared to later networks like CSnet and Bitnet. All connects were local