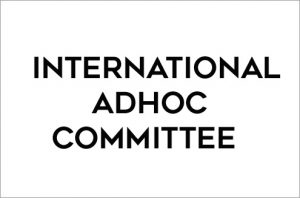 The IAHC (International Ad Hoc Committee) was formed in 1996 by the Internet Assigned Numbers Authority (IANA) and Internet Society (ISOC). During this period, commercial restrictions on the web were lifted by the National Science Foundation (NSF), which resulted in the Internet’s first major explosion of commercial growth and the number of computers on the Internet doubling every three months. IAHC was a temporary alliance brought together to focus on the issue of managing the Domain Name System so that it could serve the rising number of computers effectively. The committee was made up of several organizations: IANA, ISOC, the Internet Architecture Board (IAB), the International Telecommunications Union (ITU), Federal Networking Council (FNC), International Trademark Association (INTA), and the World Intellectual Property Organization (WIPO). The IAHC was dissolved on May 1, 1997 in favor of the Generic Top Level Domain Memorandum of Understanding (gTLD-MoU).

Until May 1996, .com, .org, .net were the primarily used gTLDs. Dr. Jon Postel, head of IANA, which managed allocation of IP addresses, suggested revising the Domain Name System in order to assist the internet’s rapidly growing commercial use. He proposed to add 50 new TLDs. The suggestion, however, was criticized by the technical community on several regards, the main problem being that the plan allowed anyone the right to register domain names in as many as three of the new TLDs, which would potentially decrease competition.

Later, with the help of ISOC, the IAHC was formed in September 1996 to solve the domain name problem. In December 1996, IAHC drafted a report outlining its ideas for a more efficient and organized domain name system. In the final version of the report released in February 1997, IAHC addressed an inconsistency with the definition of some top level domains. At that time, TLDs were classified into two categories: International Organization for Standardization (ISO) country codes also know as national TLDs (nTLDs), such .us, .fr, .ca etc.; and a International TLDs (iTLDs), which included everything else.

The committee suggested the use of term “generic Top Level Domain (gTLD)” as a replacement for iTLDs, as they considered term “International” misleading.

Up until 1997, the International Ad Hoc Committee considered .org, .com, and .net as the only recognized TLDs. As per IAHC’s definitions, .com was kept aside for firms or businesses, .org for not-for-profit entities, and .net for firms that deal with emphasizing data networking services especially in reference to the Internet. The report recommended a Generic Top Level Domain Memorandum of Understanding (gTLD-MoU), which would set-up seven new gTLDs:

The report also led to the establishment of a large group of global registries, under the governance of Council of Registrars (CORE), to look after the new registries for the gTLDs proposed by the IAHC.

The IAHC managed to garner support, yet its report was criticized on several grounds. The technical community viewed the report as too condensed and strict, as it scheduled a 100-day timeline for the technological development and implementation of the new TLDs. Others thought that the report gave no importance to important business issues, and that it was failing to solve the problems that it was created to solve. One major point was that there was a lack of unity among the suggestions given by the IAHC; for instance, the introduction of the .store and .firm domains alongside the already established .com. Many of the IAHC’s recommendations were later successful proposals, including .info, which the Internet Corporation for Assigned Names and Numbers (ICANN) introduced later, after the dissolution of the committee in May 1997.

The Internet Corporation for Assigned Names and Numbers (ICANN), a not-for-profit private sector corporation took over the functioning of the IAHC. In the year 2000, ICANN approved seven new TLDs for use: .info, .museum, .name, .aero, .biz, .coop, and .pro.