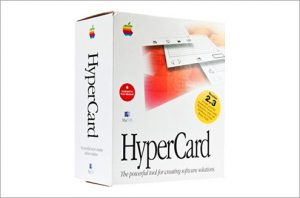 HyperCard is an application program and programming tool for Apple Macintosh and Apple IIGS computers, that is among the first successful hypermedia systems before the World Wide Web. It combines database capabilities with a graphical, flexible, user-modifiable interface. HyperCard also features HyperTalk, a programming language for manipulating data and the user interface. This combination of features – simple form layout, database capabilities and ease of programming – led to widespread use in many different roles. Some HyperCard users employed it as a programming system for rapid application development of applications and databases, others for building interactive applications with no database requirements, command and control systems, and many examples in the demoscene. HyperCard was originally released in 1987 for $49.95 and was included for free with all new Macs sold at the time. It was withdrawn from sale in March 2004 after its final update in 1998. HyperCard has not been ported to Mac OS X but ran in the Classic Environment.

HyperCard changed the way people on the Macintosh platform created programs. Furthermore, it changed the way they worked -and, for some, the way they learned. A regularly used and successful product after its launch in 1987, HyperCard was being used by individuals, home users, businesses, and in education. Rather than having one sole purpose, HyperCard could be used for many things ranging from communications, presentations, and basic games to keeping an address book or solely for programming. Like many other Apple products, HyperCard was ahead of its time. Many have viewed it as a lost opportunity for Apple, especially because of its resemblance to HTML (HyperText Markup Language) on the World Wide Web.

Bill Atkinson started the HyperCard project in 1985. Atkinson had previously been a key member of the Macintosh and Lisa teams at Apple, writing MacPaint and contributing many inventions to the field of computing including the marching ants and selection lasso (both seen in many programs today like Photoshop and GIMP). Atkinson is also credited with the creation of QuickDraw and LisaGraf. In a series of unfortunate events in the early 1980s,  Apple’s contract with Microsoft for Applesoft Basic ended in September 1985.2 Bill Gates, then CEO of Microsoft, exploited the opportunity and stopped Apple from releasing its own BASIC for the Mac. At the same time, Gates gained a license to use the Macintosh user interface in future versions of his competing Windows operating system from then Apple CEO John Sculley. Ultimately, this meant Apple lost a copyright infringement lawsuit against Microsoft that lasted four years. Atkinson started the HyperCard project to give users and developers on the Macintosh an easier way to create programs. At the time, programs were typically created with assembly code, and an Apple Lisa was also required to develop for the Mac. HyperCard was known as WildCard during its development. The name was later changed to HyperCard to avoid trademark issues. However, the HyperCard application and associated files retain a creator code of WILD, reflecting the development name.

HyperCard worked on the principle of stacks and cards. Cards hold data like a rolodex does, and they are contained in a stack that can be read by anyone who has HyperCard or the HyperCard Player. Cards can display whatever the creator wants, whether it be images, text, or sound. What made HyperCard unique was its capability to do multiple tasks. It could be used as a word processor, database, graphics system, calculator, an address book, and more. What’s more, it was entirely interactive rather than providing a static solution like a word processor does with a document that “just sits there”, as HyperCard’s creator Atkinson said in 1987.

HyperCard was officially released in 1987 to coincide with the MacWorld Conference & Expo in Boston, Massachusetts to generate publicity and raise awareness. At the time, Apple CEO John Sculley said “In many ways, HyperCard is just as important as the personal computer itself,” HyperCard was bundled free-of-charge with all new Macintoshes, and Sculley said current owners could purchase it for less than $50.4 Despite all the attention HyperCard attracted, it was not the first piece of software of its type, as Apple had claimed. Elizabeth Armstrong of STart Magazine mentioned in 1987 that the Atari ST’s Zoomracks program came before HyperCard – two years earlier in fact. Zoomracks was very similar to HyperCard in that it used the “cards and stacks” metaphor.

Apple introduced HyperCard for the Apple IIGS (the IIGS was part of Apple’s computer lineup from 1987 until 1993) in January of 1991.6 Roger Wagner Publishing had already released a similar product for the IIGS in 1989 called HyperStudio that also included a programming language similar to HyperText which offered more control over the way stacks were created. Apple handed HyperCard to Claris, its software subsidiary, in 1990.8 While the product was under Claris, several significant improvements were introduced including System 7 support. In January 1993, the Macintosh press was worried that HyperCard would soon be discontinued because of Claris’ inability to make a profit from the product, and the lack of finances to support the “many millions of HyperCard users who acquired the program for free when it was bundled with every Mac”.9 Little less than a month later, HyperCard was handed back to Apple and a crisis was quickly averted. MacWeek called the original transfer a “misstep” as Claris targeted the mass market instead of developers and scriptors who “are HyperCard’s real audience”. The last HyperCard update was version 2.4, released in April 1998 according to Apple’s Technical Notes.11 MacWorld positively reviewed the update, calling it a “no-brainer” for existing 2.3 users.12 However, it was mentioned that “it’s hard to take HyperCard seriously when, after 11 years, it still sports the black-and-white interface designed for the original 9-inch Mac screen”.

HyperCard was desperately in need of a 3.0 update, and the Macintosh community showed demand for such a release.

As early as 1998, Macintosh users were wondering what Apple was doing with HyperCard.13 Some wanted Apple to release an update to the ever-aging product, while others thought the source code should be released to the community. Apple CEO Steve Jobs called the rumors of HyperCard’s cancellation “bullshit” at CAUSE ’98. However only two years later with no new updates, Jobs reassigned HyperCard engineers to other roles as he decided to abandon the project. In 2002, the International HyperCard Users Group estimated there were 10,000 active HyperCard users worldwide. Even after this occurrence, Macintosh faithful still hoped for a Hypercard 3.0. Apple continued selling HyperCard until March 2004, when sales ceased and the product was removed from their website.14 This move disappointed HyperCard users, especially those reliant on the product like Mr. Mays, who in 2002 ran two Dallas fast-food franchises with an order tracking system he built himself using HyperCard.