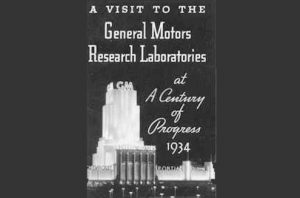 On May 8, 1986, General Motors became the 16th company to register their domain gmr.com

General Motors Research Laboratories are the part of General Motors responsible for creation of the first known operating system (GM-NAA I/O) in 1955 and contributed to the first mechanical heart, the Dodrill-GMR, successfully used while performing open heart surgery.In 1962 GM created the General Motors Research Laboratories, based in Santa Barbara, California, to conduct research and development activities on defense systems. This organization was eventually merged into Delco Electronics and renamed Delco Systems Operations.

In 1985 General Motors purchased Hughes Aircraft and merged it with Delco Electronics to form Hughes Electronics Corporation, an independent subsidiary. In 1997 all of the defense businesses of Hughes Electronics (including Delco Systems Operations) were merged with Raytheon, and the commercial portion of Delco Electronics was transferred to GM’s Delphi Automotive Systems business. Delphi became a separate publicly traded company in May 1999, and continued to use the Delco Electronics name for several of its subsidiaries through approximately 2004.

Although Delco Electronics no longer exists as an operating company, GM still retains rights to the Delco name and uses it for some of its subsidiaries including the AC Delco parts division.

THE GENERAL MOTORS CORPORATION in its institutional advertisement in August 1965 issues of national periodicals featured librarians under the legend “Answer Ma’am’’ and revealed that among its resources are twenty-two company libraries in the United States with seventy-eight persons on their staffs.l The capstone of this library “system” is the General Motors Research Laboratories Library, housed at the beautiful 600 acre Technical Center in suburban Warren, Michigan. This Library (abbreviated as the “GMR Library”) has existed since 1917, has carried out an interloan service for other company divisions since 1927, has prepared a current awareness bulletin since 1933, has a larger total collection and staff and receives more current periodical titles than many of the public library departments of technology and science responding to the questionnaire by Daniel Pfoutz and Jackson Cohena2 Yet it is far from self-sufficient. It borrows about 1,100 items on interlibrary loan a year (equivalent to one-sixth of the total interlibrary loans supplied to all industry in a year by the Massachusetts Institute of Technology librarie~,~ has deposit accounts in several of the libraries mentioned by Ralph Phelp~,~ William B~dington,~ Dwight Gray and J. Burlin Johnson,6 and still cannot answer all the demands placed upon it by its three “publics.” These are, first, the Research Laboratories staff of 500 professional scientists and engineers; second, the several hundred engineers and scientists in other staffs and groups at the Technical Center site (some of whom have their own professional library support); and, third, the thirty-three Divisions of the Corporation located all over the world. Using communications terminology, the GMR Library serves as a “switching function” between the needs of a substantial portion of the Corporation’s literature users and the library community. (For descriptions of the GMR Library and the Corporation’s “library system,” two earlier articles may be Further, it serves as a switching function between these users and the documentation services of the Department of Defense, Atomic Energy Commission, and others. This last function is also exercised by certain Division library services having broader access to more highly classified military documents than the “need to know” of the Research Laboratories permits; It seems inevitable that there is a triangle associated with the availability of information to an industrial firm.

At the apex is a small area representing material physically located at a given location; below this, there is an area larger in size representing material elsewhere in the Company; and finally the far larger area in the remainder of the triangle represents the material aiyailable on the outside. Interlibrary loan is the catalyst that permits a decentralized industrial library system to work under these circumstances. Although the accurate keeping of statistics suffers by the pressure of business to get the job done, the figures on interlibrary loans (frm non-Ghif Libraries) and interloans (to other parts of the Corporation) are more accurate than most which were kept. Table 1 shows that they have been fairly constant at the respective levels of 1,100 interlibrary loans and nearly 6,000 interloan requests per year during the period 1957 to 1964. As interloans initiate a certain percentage of GMR interlibrary loan requests, they will be considered first. It is to be noted that Table 1 excludes all activities contiguous to the Research Laboratories, as employees of a transportation manufacturer are highly mobile and accustomed to taking advantage of “cafeteria” service of the kind offered by GMR Library.