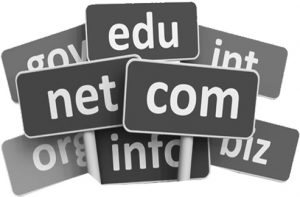 As the first computers were connected there became a requirement to name computers in order to understand where information was being sent and received from and form of identification was needed to properly access the various systems. At first the networks were composed of only a few computer systems associated with the U.S. Department of Defence and other institutions Host.txt files were used, however as the number of connections grew, a more effective system was needed to regulate and maintain the domain paths throughout the networks.

Before the World Wide Web

The ubiquitous domain name system (DNS) has its roots almost as early as the Internet itself. As the early Internet grew through the 1970s with the advent of email and newsgroups, the problem of locating computers on connected networks also grew. In 1972, IANA, the Internet Assigned Numbers Authority was created by the U.S. Defense Department agency responsible for the Internet to assign a unique number to each computer in its network. By 1973, the TCP/IP network technology became the widely adopted communication protocol for locating and connecting to computers and was the de facto standard among many other competing choices at the time.

History of the Internet Domain Name

When the first computers began connecting to each other over Wide Area Networks (WAN’s), like the ARPANET in the 1960’s, a form of identification was needed to properly access the various systems. At first the networks were composed of only a few computer systems associated with the U.S. Department of Defence and other institutions. As the number of connections grew, a more effective system was needed to regulate and maintain the domain paths throughout the network. In 1972 the U.S. Defence Information Systems Agency created the Internet Assigned Numbers Authority (IANA). IANA was responsible for assigning unique ‘addresses’ to each computer connected to the Internet. By 1973, the Internet Protocol or IP addressing system became the standard by which all networked computers could be located. The new Internet continued to grow throughout the 70’s with the creation of electronic mail (e-mail) and newsgroups.

Greater numbers of users networking with each other created a demand for a more simple and easy-to-remember system than the bulky and often confusing IP system of long, cumbersome strings of numbers. This demand was answered by researchers and technicians at the University of Wisconsin who developed the first ‘name server’ in 1984. With the new name server, users were no longer required to know the exact path to other systems. And thus the birth of the current addressing system in use today.

A year later the Domain Name System was implemented and the initial top-level domain names, including .com, .net, and .org, were introduced.
Suddenly 121.245.078.2 became ‘company.com’.

The World Wide Web, InterNIC, and the public domain

In 1990, the Internet exploded into commercial society and was followed a year later by the release of the World Wide Web by originator Tim Berners-Lee and CERN. The same year the first commercial service provider began operating and domain registration officially entered the public domain. Initially the registration of domain names was free, subsidized by the National Science Foundation through IANA, but by 1992 a new organization was needed to specifically handle the exponential increase in flow to the Internet. IANA and the NSF jointly created InterNIC, a quasi-governmental body mandated to organize and maintain the growing DNS registry and services.

Overwhelming growth forced the NSF to stop subsidizing domain registrations in 1995. InterNIC, due to budget demands, began imposing a $100.00 fee for each two-year registration. The next wave in the evolution of the DNS occurred in 1998 when the U.S. Department of Commerce published the ‘White Paper’. This document outlined the transition of management of domain name systems to private organizations, allowing for increased competition.

ICANN and the spirit of the Internet

That same year, the Internet Corporation for Assigned Names and Numbers was formed. This non-profit, private sector corporation formed by a broad coalition of the Internet’s business, technical, and academic interests worldwide is recognized as the “global consensus entity to coordinate the technical management of the Internet’s domain name system, the allocation of IP address space, the assignment of protocol parameters, and the management of the root server system.”One of ICANN’s primary concerns is to foster a greater spirit of competition within the domain registration industry. Where before there was only a single entity offering registration services, ICANN has now accredited a number of other companies to add to the global domain name database. This is called the Shared Registration System.

Today there is an estimated 19 million domain names registered, with forty thousand more registered every day. The Internet continues its unprecedented growth into the stratosphere and there is really no end in sight. This growth only serves to underline the benefits of moving registration from government control to private sector control, benefits that are embedded within the spirit of the Internet itself: accessibility, freedom, competition.

Today, the Internet Corporation for Assigned Names and Numbers (ICANN) manages the top-level development and architecture of the Internet domain name space. It authorizes domain name registrars, through which domain names may be registered and reassigned.

A domain name consists of one or more parts, technically called labels, that are conventionally concatenated, and delimited by dots, such as example.com. The right-most label conveys the top-level domain; for example, the domain name www.example.com belongs to the top-level domain com. The hierarchy of domains descends from the right to the left label in the name; each label to the left specifies a subdivision, or subdomain of the domain to the right. For example: the label example specifies a node example.com as a subdomain of the com domain, and www is a label to create www.example.com, a subdomain of example.com. This tree of labels may consist of 127 levels. Each label may contain from 1 to 63 octets. The empty label is reserved for the root node. The full domain name may not exceed a total length of 253 ASCII characters in its textual representation In practice, some domain registries may have shorter limits.