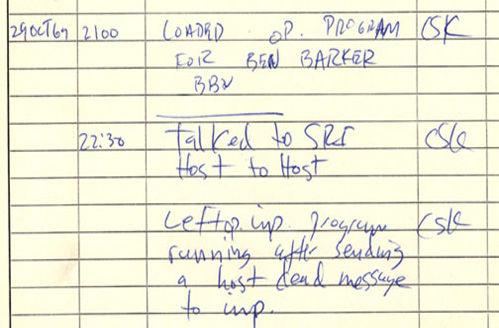 On October 29th 1969, two computers connected to form the ARPANET and launch the world’s first successful packet-switched wide area computer network. This first connection, in the form of a logon request, was sent to SRI International (then known as Stanford Research Institute) from the University of California, Los Angeles (UCLA). This remote access initiated a new, flexibly formed network structure for computer resource sharing. While not yet an internet, it did lay critical groundwork for the subsequent Internet and the dramatic changes in how we conduct business, communicate, socialize, learn, distribute knowledge, and travel. Internetworking began in 1977, when SRI also played a pivotal role in the first known connection of three dissimilar networks.

The U.S. Department of Defense Advanced Research Projects Agency (DARPA, then known as ARPA) began the work that led to the ARPANET in the mid 1960s. A major goal was to create a reliable computer network with built-in network redundancy that would provide reliable communications between its major nodes as well as remote access to these same computing resources, even when the network was subject to attack.

The initial ARPANET was a network of just four computers located at four different sites: first UCLA and SRI, followed by the University of California, Santa Barbara and the University of Utah. By 1972, the ARPANET comprised 37 computers. In the ensuing years it was opened to other research and development sites including other universities, research contractors, and government labs. Its usefulness as a platform for the new world of digital communications and information sharing soon became evident.

The first message on the ARPANET was sent by UCLA student programmer Charles S Kline at 10:30 pm on October 29, from the campus’ Boelter Hall to the Stanford Research Institute’s SDS 940 host computer.

The message text was meant to be the word “login,” but only the L and O were transmitted before the system crashed.

About an hour after the crash, the system was recovered and a full “login” message was sent as the second transmission.

By 1975, ARPANET was declared “operational” and the Defense Communications Agency took control of it. In 1983, ARPANET was split with US military sites on their own Military Network (MILNET) for unclassified defense department communications. The combination was called the Defense Data Network.