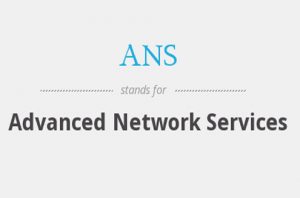 Advanced Network and Services (ANS) was a United States non-profit organization formed in September 1990 by the NSFNET partners (Merit Network, IBM, and MCI) to run the network infrastructure for the soon to be upgraded NSFNET Backbone Service.

In anticipation of the NSFNET Digital Signal 3 (T3) upgrade and the approaching end of the 5-year NSFNET cooperative agreement, in September 1990 Merit, IBM, and MCI formed Advanced Network and Services (ANS), a new non-profit corporation with a more broadly based Board of Directors than the Michigan-based Merit Network. Under its cooperative agreement with US National Science Foundation (NSF), Merit remained ultimately responsible for the operation of NSFNET, but subcontracted much of the engineering and operations work to ANS. Both IBM and MCI made substantial new financial and other commitments to help support the new venture. Allan Weis left IBM to become ANS’s first President and Managing Director. Douglas Van Houweling, former Chair of the Merit Network Board and Vice Provost for Information Technology at the University of Michigan, was the first Chairman of the ANS Board of Directors.

Completed in November 1991, the new T3 backbone was named ANSNet and provided the physical infrastructure used by Merit to deliver the NSFNET Backbone Service.

In 1991 a new ISP, ANS CO+RE (commercial plus research), was created as a for-profit subsidiary of the non-profit Advanced Network and Services. ANS CO+RE was created specifically to allow commercial traffic on ANSNet without jeopardizing its parent’s non-profit status or violating any tax laws.

ANS and in particular ANS CO+RE were involved in the controversies over who and how commercial traffic should be carried over what had, until recently, been a government sponsored networking infrastructure. These controversies are discussed in the “Commercial ISPs, ANS CO+RE, and the CIX” and “Controversy” sections of the NSFNET article.

In 1995, after the transition to a new Internet architecture and the NSFNET Backbone Service was decommissioned, ANS sold its networking business to AOL for a little over $30M and became a philanthropic organization with a mission to advance education by accelerating the use of computer network applications and technology”. This work helped create ThinkQuest, the National Tele-Immersion Initiative, the IP Performance Metrics program, and provided grant funding for educational programs including TRIO Upward Bound, the Internet Society, Internet2, Computers for Youth, Year Up, National Foundation for Teaching Entrepreneurship, Sarasota TeXcellence Program, and many others.

ANS closed down its operations in the mid 2015.

ANS was incorporated in the State of New York and had offices in Armonk and Poughkeepsie, New York.