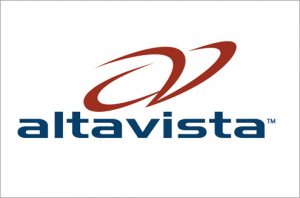 AltaVista was a web search engine established in 1995. It became one of the most used early search engines, but lost ground to Google and was purchased by Yahoo! in 2003, which retained the brand but based all AltaVista searches on its own search engine. On July 8, 2013, the service was shut down by Yahoo! and since then, the domain has redirected to Yahoo!’s own search site

AltaVista was created by researchers at Digital Equipment Corporation’s Network Systems Laboratory and Western Research Laboratory who were trying to provide services to make finding files on the public network easier. Paul Flaherty came up with the original idea, along with Louis Monier and Michael Burrows, who wrote the crawler and indexer, respectively. The name “AltaVista” was chosen in relation to the surroundings of their company at Palo Alto, California. AltaVista publicly launched as an internet search engine on December 15, 1995 at altavista.digital.com.

At launch, the service had two innovations that put it ahead of other search engines available at the time: it used a fast, multi-threaded crawler (Scooter) that could cover many more webpages than were believed to exist at the time, and it had an efficient back-end search, running on advanced hardware.

As of 1998, it used 20 multi-processor machines using DEC’s 64-bit Alpha processor. Together, the back-end machines had 130 GB of RAM and 500 GB of hard disk space, and received 13 million queries every day. This made AltaVista the first searchable, full-text database of a large part of the World Wide Web.  Another distinguishing feature of AltaVista was its minimalistic interface, which was lost when it became a portal, but regained when it refocused its efforts on its search function. It also allowed the user to limit search results from a domain, reducing the likelihood of multiple results from the same source.

AltaVista’s site was an immediate success. Traffic increased steadily from 300,000 hits on the first day to more than 80 million hits per day two years later. The ability to search the web, and AltaVista’s service in particular, became the subject of numerous articles and even some books. AltaVista itself became one of the top destinations on the web, and in 1997 it earned US$50 million in sponsorship revenue.

By using the data collected by the crawler, employees from AltaVista, together with others from IBM and Compaq, were the first to analyze the strength of connections within the budding World Wide Web in a seminal study in 2000.

In 1996, AltaVista became the exclusive provider of search results for Yahoo!. In 1998, Digital was sold to Compaq and in 1999, Compaq redesigned AltaVista as a web portal, hoping to compete with Yahoo!. Under CEO Rod Schrock, AltaVista abandoned its streamlined search page, and focused on adding features such as shopping and free e-mail. In June 1998, Compaq paid AltaVista Technology Incorporated (“ATI”) $3.3 million for the domain name altavista.com – Jack Marshall, cofounder of ATI, had registered the name in 1994.

In June 1999, Compaq sold a majority stake in AltaVista to CMGI, an internet investment company. CMGI filed for an initial public offering for AltaVista to take place in April 2000, but when the internet bubble collapsed, the IPO was cancelled. Meanwhile, it became clear that AltaVista’s portal strategy was unsuccessful, and the search service began losing market share, especially to Google. After a series of layoffs and several management changes, AltaVista gradually shed its portal features and refocused on search. By 2002, AltaVista had improved the quality and freshness of its results and redesigned its user interface.

In February 2003, AltaVista was bought by Overture Services, Inc. In July 2003, Overture was taken over by Yahoo!.

In December 2010, a Yahoo! employee leaked PowerPoint slides indicating that the search engine would shut down as part of a consolidation at Yahoo!. In May 2011, the shutdown commenced, and all results began to be returned on a Yahoo! page.

AltaVista provided Babel Fish, a web-based machine translation application that translates text or web pages from one of several languages into another. It was later superseded by Yahoo! Babel Fish and now redirects to Bing’s translation service. They also provided free email.

On June 28, 2013, Yahoo! announced that AltaVista would be closed on July 8, 2013. The decision to close AltaVista was announced on Yahoo!’s Tumblr page.

Since that day, visits to AltaVista’s home page are redirected to Yahoo!’s main page.